A note on Artists at Work at the Courtauld Gallery

The exhibition Artists at Work at the Courtauld Gallery featuring some of the drawings from my collection selected by the artist Deanna Petherbridge now has only another couple of weeks to run before it closes on July 15th. I am very happy that this small show has had a steady flow of visitors and a number of favourable reviews. It proves that the space dedicated to the display of drawings at the Courtauld is by now well established and helps to keep works on paper visible. Next week should see a last surge of visitors as London Art Week attracts drawing lovers from abroad who will, I hope, find their way there. I enjoy sharing the works I own either by lending to exhibitions or in private visits, as one of the great pleasures of collecting is showing the works to others who are equally interested and hearing their thoughts.

Over the years many artists have viewed my collection and I have found their responses are often quite different from those of connoisseurs or art historians, for what they bring is a knowledge and approach informed by their own practice. I was therefore delighted when Deanna Petherbridge came to visit. Herself an artist and draughtswoman, she has also written extensively about the subject of the artist at work. In her great publication The Primacy of Drawing: Histories and Theories of a Practice, two chapters are dedicated to depictions of artists in drawings [1]. I had always been impressed with her observations on the subject and was delighted when my friend Niall Hobhouse introduced us. After making her way through many boxes she suggested that she would love to curate an exhibition from my holdings. We both agreed that The Courtauld’s Drawings Gallery would be an ideal space to exhibit the small, focused selection she would make. It was interesting for me that her choice was very different from the one I would have made.

She combined works by well-known artist like Ingres, Fragonard, Tiepolo and Robert with very little-known ones. She included a drawing by the German artist Georg Eduard Gehbe (1845–1920) in the section that depicts artists working outdoors and it makes for an amusing addition with the artist busy at his easel being startled by a jumping deer (Fig. 1). Amongst the drawings showing artists’ studios is a great example of a cluttered interior, with the artist absent but a mannequin present, by the obscure artist Ermenegildo Antonio Donadini (1847–1936) who was working in Munich at the time (Fig. 2). Another deserted studio space is that of the sculptor Remo Rossi in Locarno, drawn by another German artist Horst Janssen (1929–1995) (Fig. 3). It was the exhibition’s co-curator Anita Viola Sganzerla who identified the space by recognising the prominent sculptures in the centre as works by Swiss artist Remo Rossi (1909–1982). I was delighted that Deanna choose not one but two examples by Janssen because this brilliant draughtsman and printmaker deserves to be better known outside his home country. I very much hope you will have a chance to see the exhibition, which is accompanied by a catalogue written by the two curators (Paul Holberton Publishing, May 2018).

[1] Deanna Petherbridge, The Primacy of Drawing: Histories and Theories of a Practice(Yale University Press, 2010).

‘Artists at Work’ will be on view in the Gilbert and Idliko Butler Drawings Gallery, The Courtauld Gallery, London until 15 July 2018. 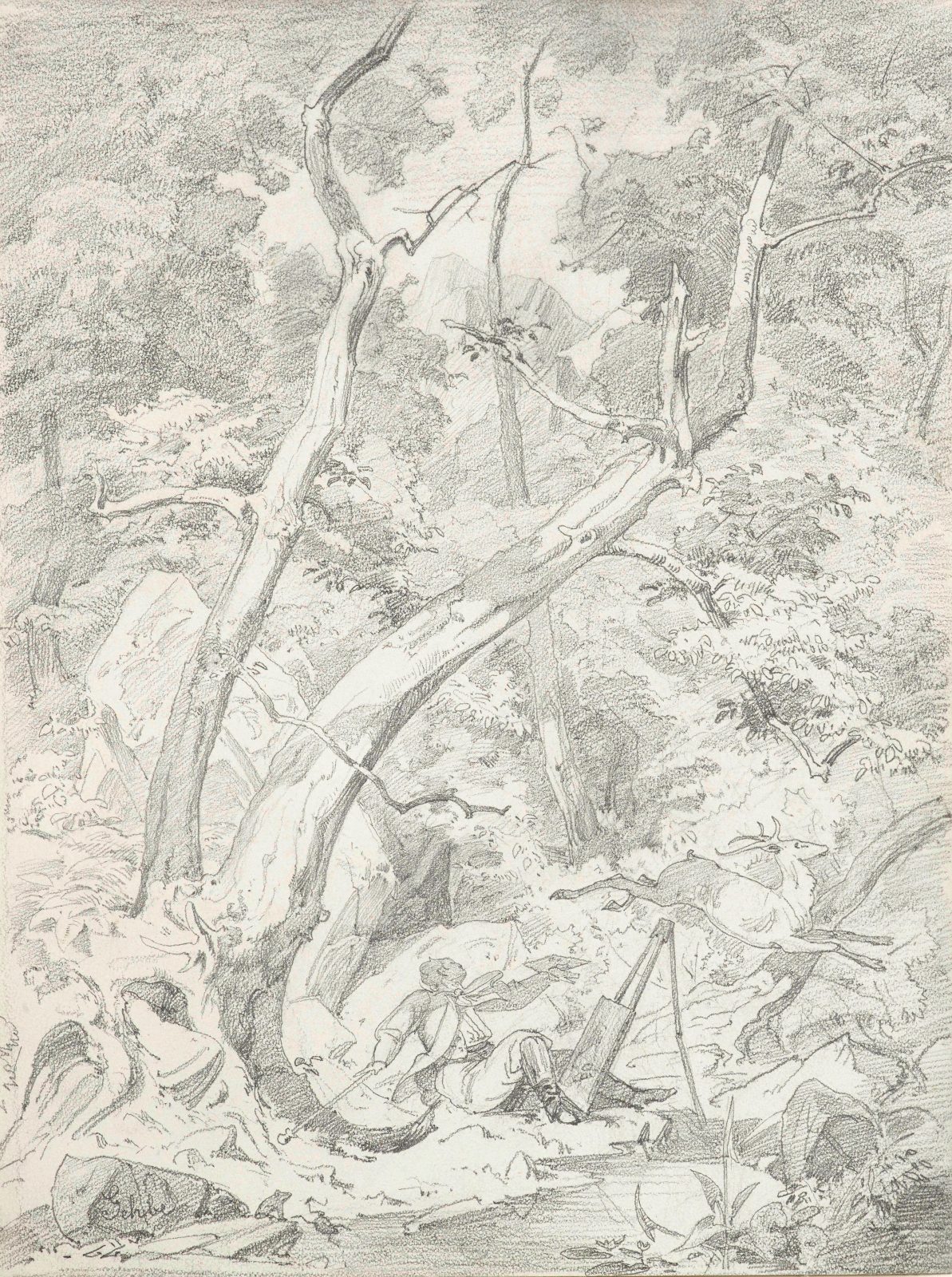 Fig. 1 Georg Eduard Gehbe, A painter in a forest, surprised by a deer, graphite 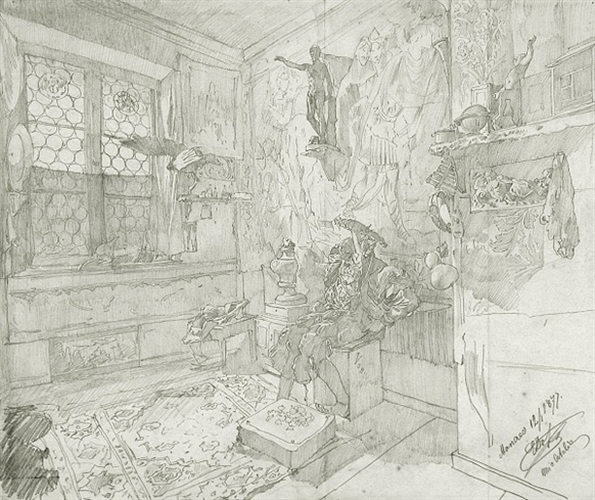 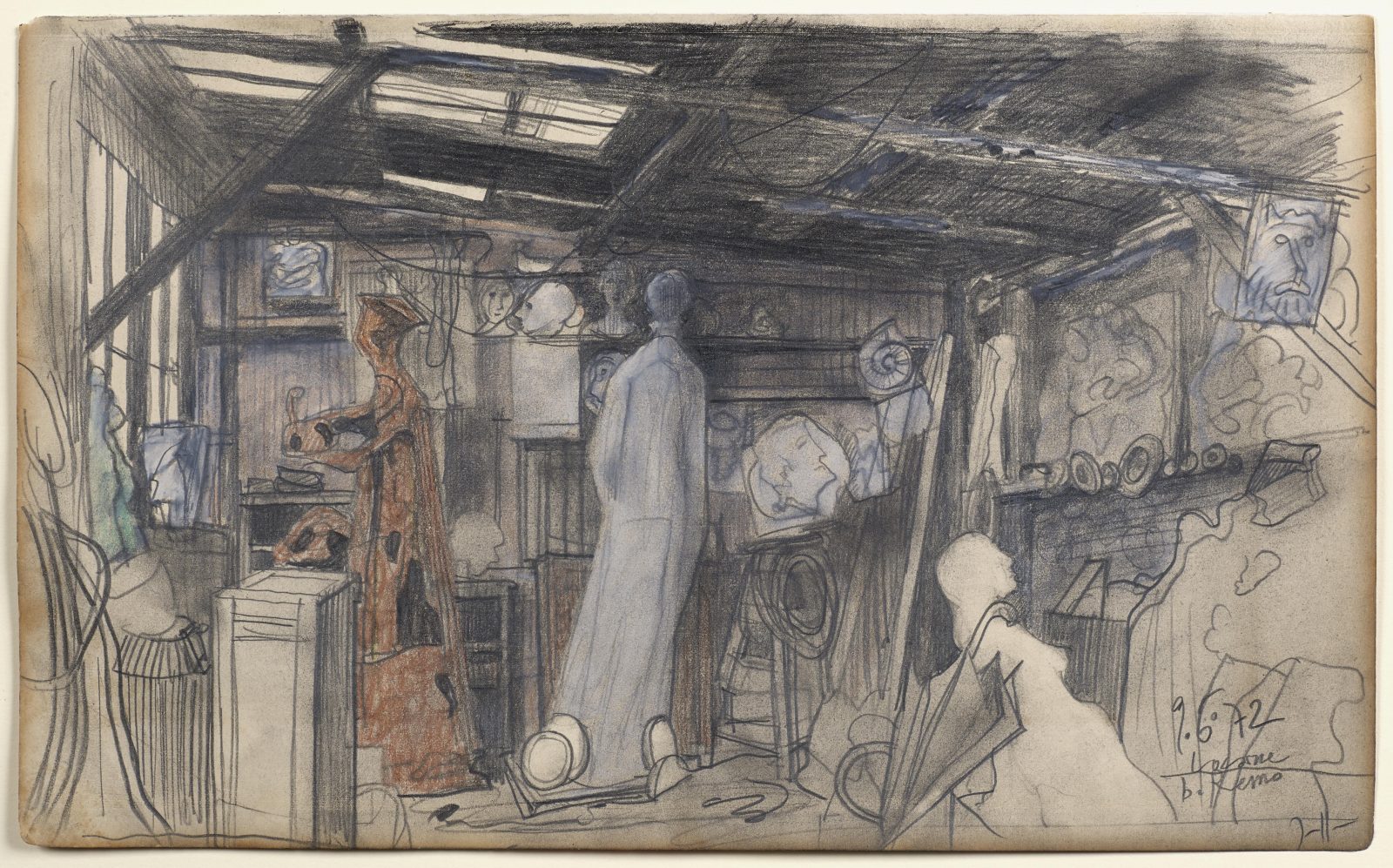