The whole world is Angelicamad

A major exhibition devoted to Angelica Kauffman RA (1741-1807) closed last month at the Kunstpalast in Düsseldorf. The show’s long awaited second leg at the Royal Academy was sadly cancelled – as so many were this year – leaving London still longing for a worthy celebration of this exceptional artist. The Royal Academy exhibition would have been the first monographic show of Kauffman at the institution that she helped found in 1768. After a formative period in Italy, it was in London that she achieved recognition and fame, charming her sophisticated patrons and fellow artists alike. She would later return to Italy to set-up a successful studio in Rome.

Curated by the distinguished Kauffman expert Bettina Baumgärtel (responsible for the Angelika Kauffman Research Project), the Düsseldorf exhibition presented a selection of 110 amongst her finest works, both masterpieces and newly identified paintings, and succeeded in showing Kauffman as the first woman artist of European standing.

The four ceiling paintings Kauffman created for the Royal Academy’s Council Room in Somerset House travelled to Germany and were shown outside London for the first time since their unveiling in 1780. Unique in being major decorative paintings executed by a woman, they showcase Kauffman’s skills in inventing graceful yet commanding female allegories, through a persuasive blend of tradition and innovation. All four allegorical figures are, obviously, female. Notably, by depicting Disegno, traditionally a male figure, as a woman artist studying an antique model (the Belvedere Torso) Kauffman made a strong claim for the professional ambitions of women artists such as herself and her peers (Fig. 1). The exhibition also shed light on Kauffman’s working practice, visitors were able, for instance, to see the four large ceiling paintings showing Invention, Composition, Design and Colouring alongside the corresponding preparatory oil sketches, now held at the Victoria and Albert Museum.

Born in Chur, Switzerland, Kauffman trained as both a painter and a musician, showing early promise in both disciplines. After the death of her mother in 1757, however, she devoted herself to painting – her father’s trade. In her Self-portrait at the Crossroads between the Arts of Music and Painting (1794) made in Rome, when she was in her 50s, she revisited the arduous choice she had faced as a young woman [1]. A blend of portraiture and history painting, this is the ultimate manifesto of Kauffman’s art: she gained success as a portraitist but aspired to the accolades that only history painting could bring.

The theme of rivalry between the Arts is also at the heart of an earlier autobiographical work, the Self-Portrait in the Character of Design Listening to the Inspiration of Poetry (Fig. 2) [2]. Here she upholds the value of sisterhood between painting and poetry: it is by following the guidance of Poetry that Design is able to give life to compelling and virtuous inventions, gaining her place amongst the liberal arts.

First developed by Horace in the Ars Poetica, the concept of Poetry and Painting as sister arts united by the power of imitation was expanded upon by Sir Joshua Reynolds in his Seven Discourses on Art, which in turn had a crucial impact on Kauffman’s own understanding of the kinship between the visual and liberal arts. Several drawings by Kauffman also relate to this theme. A well-known example is her Self-Portrait as Imitatio (Fig. 3), where a young woman, identified on her headband as ‘Imitatio’, sits at her desk holding a stylus, and looks out at us, as if interrupted while writing or sketching.

Kauffman’s composition known as The Three Fine Arts (Painting, Architecture and Sculpture) was disseminated in stipple engravings by Francesco Bartolozzi and Daniel Berger (Fig. 4), a channel through which many of her images reached a wider public. A drawing in the Katrin Bellinger Collection (Fig. 5), probably not by Kauffman’s hand, takes its lead from the same invention to draft what appears to be a more elaborate allegory. Here, Architecture has been replaced by Design. The faintly delineated figure standing beside her rests her right hand on Design’s shoulder, in a gesture reminiscent of the aforementioned Self-Portrait in the Character of Design Listening to the Inspiration of Poetry.

Kauffman’s works were reproduced, copied and even adapted for the decoration of porcelain and fans. Her success was such that, in 1781, the Danish ambassador in London quoted an engraver as saying ‘the whole world is Angelicamad’. 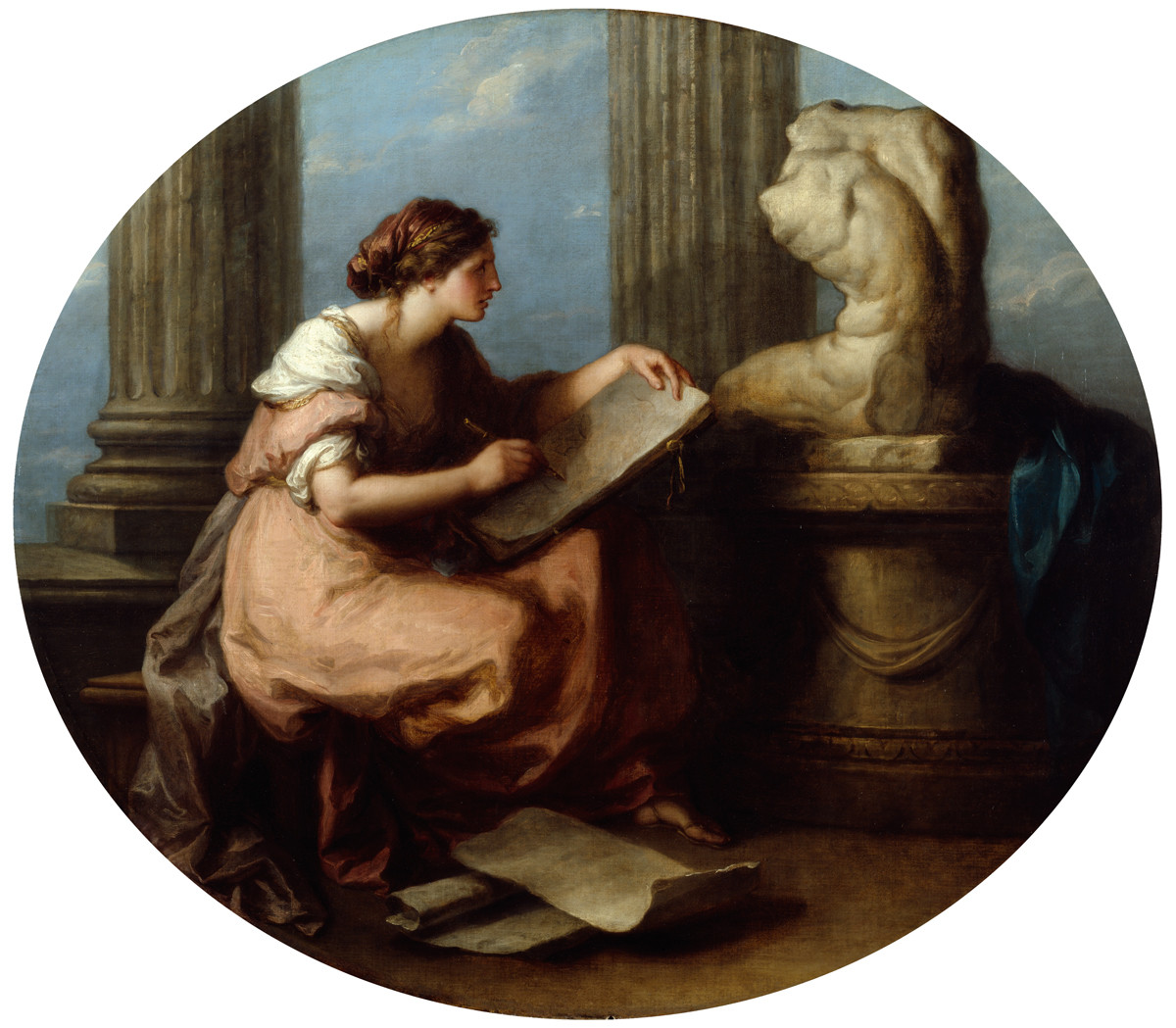 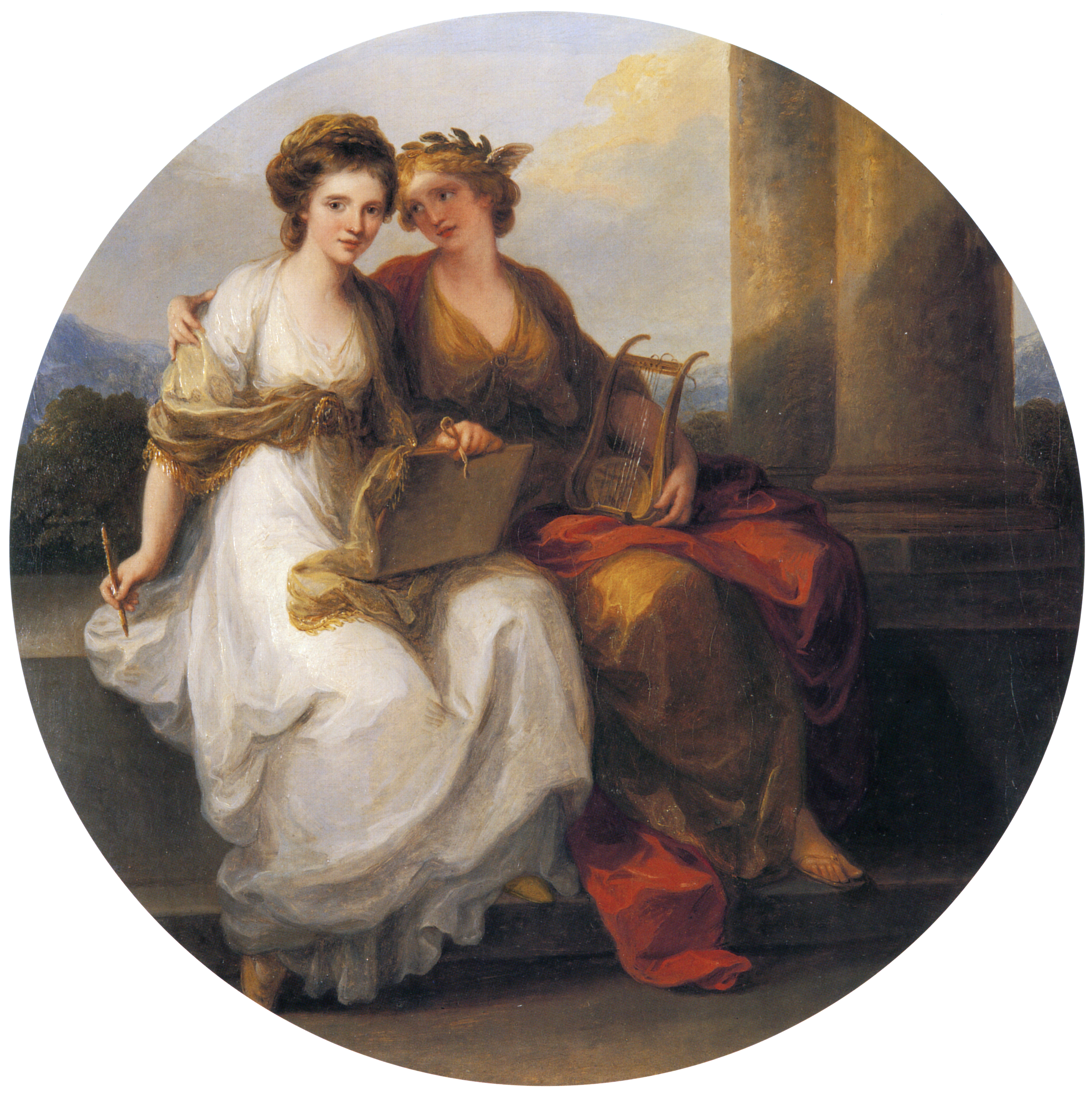 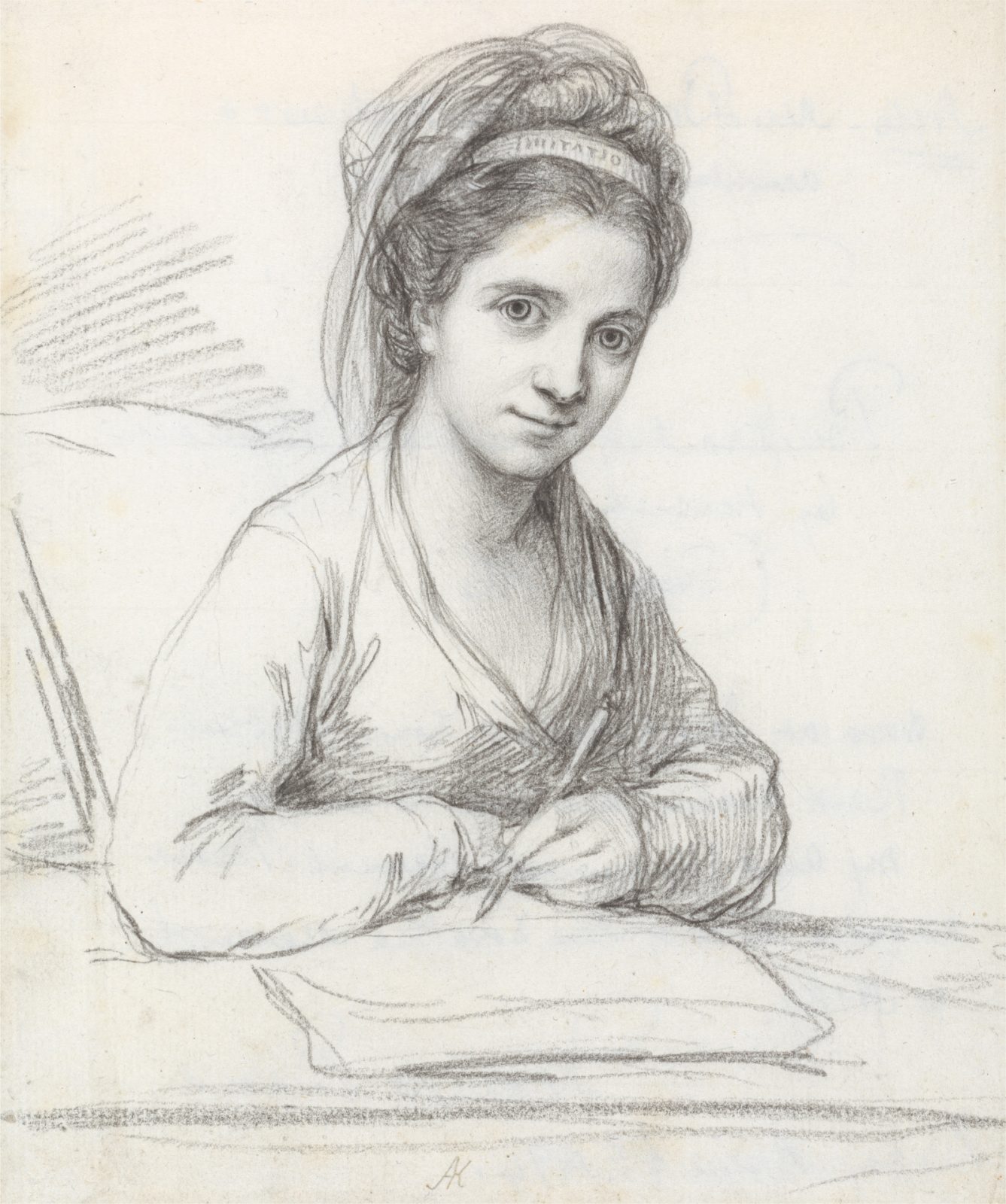 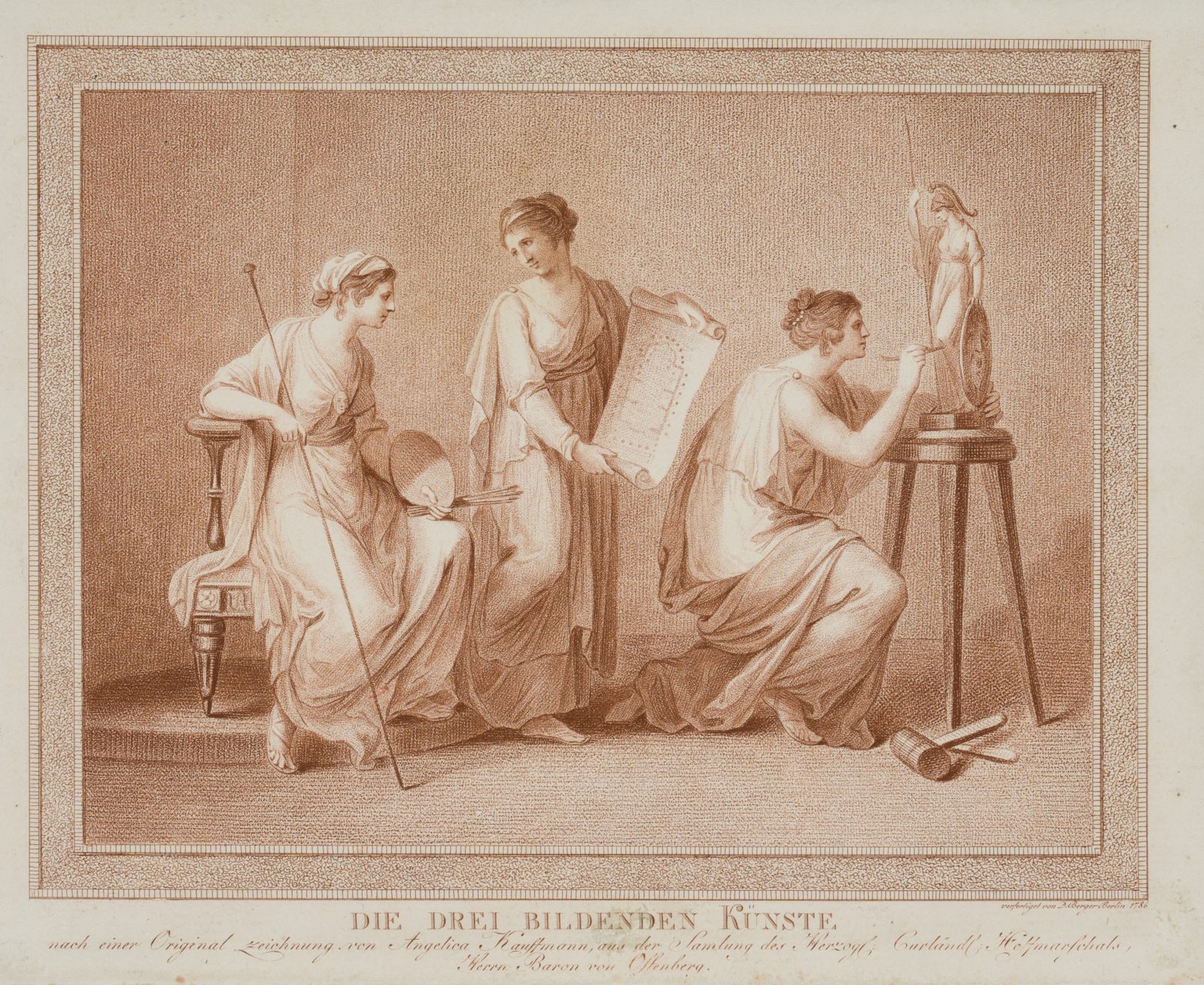